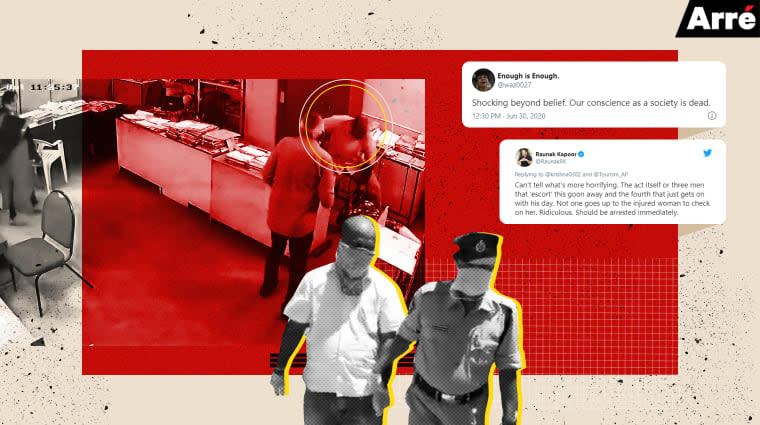 Told to Wear a Mask, Andhra Govt Official Assaults Woman. What’s the Cost of “Rokna, Tokna” in this Country?

"Rlang="en" dir="ltr">The Nellore policearrested an employee of Andhra Pradesh tourism department for assaulting a woman contract worker. The disturbing incident was caught on CCTV camera | Watch here https://t.co/DfqsUSKImA. — The Indian Express (@IndianExpress) June 30, 2020. The incident was captured on CCTV in Nellore, Andhra Pradesh, and Rao quickly became infamous as the clip hit the internet. It is a graphic video, featuring Rao pulling the woman off her chair by her hair, and at one point picking up what looks like a rod to continue his attack. A couple of other people in the room attempt to stop him, but not before he manages to hit the woman multiple times. Many were shocked by how brazenly he began his assault, and was allowed to leave the room by the bystanders afterward. The incident took place on Saturday, June 27. The clip began to circulate, and outrage began to grow. However, it took a few days before the victim was able to register a police complaint. The video was brought to the attention of the Chairperson of the National Commission for Women, Rekha Sharma, who announced she would take up the case with the weight of the commission behind her. The police filed charges against Rao under multiple sections of the Indian Penal Code. He was eventually arrested. Nellore police chief Bhaskar Bhushan was quoted by NDTV as saying, "We have arrested him following the Covid protocol. He has undergone Covid test and after the results, he will be presented before the magistrate". Before CCTV cameras, Rao embodied entitlement, misogyny, and brutish behaviour all at once, and will now hopefully pay the price for his actions.